Yesterday was Dad's birthday (he would have been 85). So it was a good day - I'd say propitious but probably can't spell it - to work on the family tree.

I'd spent months looking for my maternal grandfather Joe Hills. We knew when he died because Mum was 19 at the time. We knew how old he was when he died so we found his date of birth. However, he was nowhere to be seen in the censuses. Then the lightbulb came on. He was Hill in the censuses and various other documents, not Hills. It's the Horswill/Horswell problem all over again!

I dug and dug and came up with two possibilities for his family. Armed with a list of potential sisters I rang Mum to ask if she could remember any of her aunt's names. Previously she'd said she couldn't remember any (although she remembered he had sisters) because the family didn't keep in touch. She said "There was a Louie and an Ada ..." Yes!! Got him! 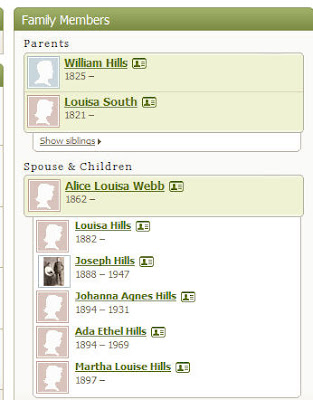 The good news is I found a new second cousin, Paul Ainsworth, and he's already joined our My Heritage site and our Facebook group. He is Johanna Hills' grandson. There's also a sad tale. Johanna, who was Ada's twin, died when she was about 36 leaving 4 young children. The two older children went to live with relatives and the younger ones went to a Barnardo's home. Life was very tough when a mother died young.

There's a clever print function in Ancestry which gives you a summary tree. More about various ways to print trees later. John has a really good summary with the whole page filled. I had annoying gaps in mine so I need to find more great great grandparents.

Geroge Horswill b1851 is my great grandfather. He married Elizabeth Ann Ash who was born in 1856 in Northill, Cornwall. Here's a photo of her: 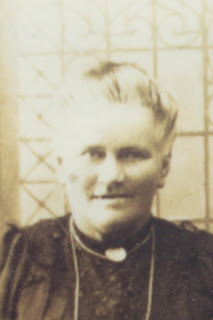 How did we know her name? Because she was on the censuses. It stands to reason then that she must have been on the censuses, living with her parents, when she was a child. Fortunately she is shown as "Elizth Ann" on the 1861 census and not just Elizabeth so she was not hard to find. In some early family trees she is shown as Ann so the enumerator probably realised she had both names and entered both. You don't see this very often.

Her father was John Ash and her mother was Susan Hannaford. Luckily for us there are dozens of Ancestry members researching these families so I was able to find ancestors back to the 1600s.

All these new relatives will eventually be put on the My Heritage tree. Some are there already. If you want to see them now, along with all the evidence, go to our private site at www.HorswillFamily.com and you can see the full Ancestry tree (FREE!)

Cool names from this research:

We have a Hezekiah Webb on the Hills side and a Jemima Trengrove on the Horswill side.
Posted by Sharon Horswill at 05:41 No comments:

We now have fancy schmancy drop down menus and more instructions, particularly on how to use the MyFamily group site where you can easily upload and download photos, add comments, send messages etc etc. It's like a private family Facebook!

The page you need is HERE. Instructions with pictures (took me forever to sort that out!)

It's all a question of following the hand. Now you'll have to go and look to see what I mean...

We have two family tree sites, as you know. They are both growing at an incredible rate. You can join the My Heritage tree and add people, dates, photos etc. In order to see the Ancestry trees (Horswill and Hills Families and Mangan Family) you need to join the My Family site (see above!) and it's on there. There are over 1000 people in the Horswill and Hills Tree and over 300 in the Mangan tree. And we've been working on that one for less than two weeks.

We've taken Uncle Chick's family back to 1350!!! What a shame he and Kit didn't have any children. I'm sure they would have been impressed.

Did you see our "Morning News" featuring them?

Posted by Sharon Horswill at 18:46 No comments:

We have a foundling!

Cuthbert Elsdon was born in 1650. He was a "foundling" left at St Cuthbert's Church in Elsdon so that's what he was called.

You can see him, along with the story, on our My Heritage Family Tree. Click on Family Tree then People and search for him. You'll find three people with that name (his descendants) but they give the date. So now you know that not everyone with a place name for a surname was lord of the manor ... It's an interesting tale but obviously one with tragedy behind it. I wonder if his real mother watched him grow up or indeed whether the real mother became the foster mother, as often happened.

His tree stops there!

How is this person related to us? My great great grandfather Roger Horswill had two wives. One after the other, not in a Mormon way! Moses Wilson Horswill is one of Roger's descendants with his second wife. I met him many years ago. I was following his line through the Wilsons and found Cuthbert through another Ancestry member. You can search for Moses Wilson Horswill on the tree and follow the line up to Cuthbert.

Adding Cuthbert Elsdon to the tree has brought us new members who are also researching him. Welcome!
Posted by Sharon Horswill at 18:34 No comments: 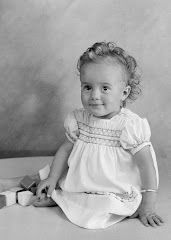